It compares two periods of time. The default is a 365-day period.

The recommended name is GivingChange

Use the code below to create the SQL Script.

See How to create a SQL Script.

The top declaration statements are where you can set/change the parameters for the report. Currently, the report is set for the minimum change percent to be 30%, the minimum dollar amount is set at $500, and the period is set as 365 days. Of course, you can set other Conditions in Search Builder when you run the report from the Toolber there.

We highly recommend that you use a range of at least 365 days. Looking at a smaller range, you will find people whose giving has decreased, for example, because they give only once a year or quarterly.

Notice in the sample report that some have Stopped giving, others have Increased or Decreased and the percent of change, and still others have Started giving. 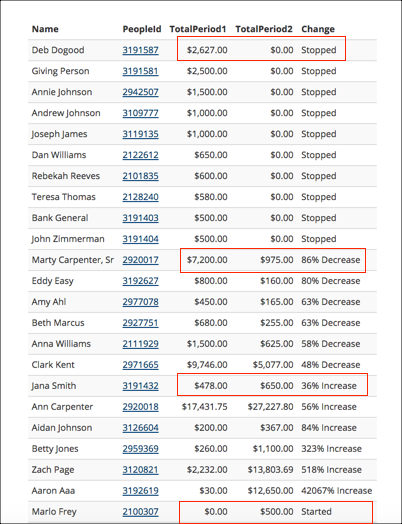