Non-Tax-Deductible Gifts, such as donations given as donor-directed gifts through a foundation or monies received from the sale of stock donations, can be entered on an individual’s giving record in such a way that will reduce the amount of a Pledge without displaying the amount as a tax-deductible charitable donation. In other words, the dollar amount will be reflected in the Pledge Amount Given on a Contribution Statement, even though the dollar amount itself will not be on the Statement.

Here’s how that works. 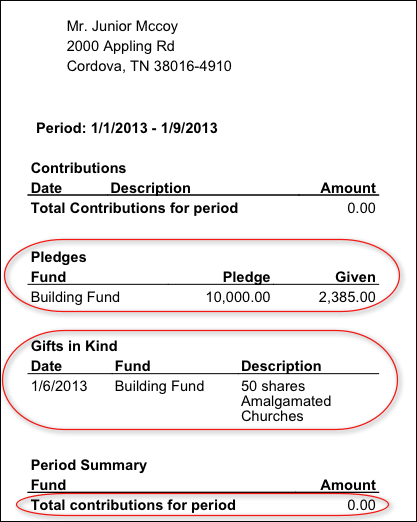 In both of these cases, the IRS regulations have been followed, because neither Bubba nor Junior are being given a tax receipt from the church for the dollar amount of the donation.

Junior, on the other hand, will see the Gift-in-Kind of 50 shares of Amalgamated Churches and will see in the pledge section his $10,000 pledge and that he has given $2,385 toward that pledge (which came from the sale of the stock).

Both Junior and Bubba will NOT have these gifts included in their giving for the period on their Contribution Statements. These Non-Tax-Deductible donations will merely show as a reduction of the amounts of their pledges.

How a donor determines the value of their stock gift¶

The donor values the stock gift for their tax deduction purposes based on the fair market value “at the time delivery was effected” which would be on the date the donor relinquished control by having his broker donate the stock.

The fair market value of the donated stock is calculated as follows:

If your church displays Non-Tax-Deductible gifts on giving Statements, you will not want to record stock gifts as a Gift-in-Kind/Non-Tax-Deductible combo (as outlined above), because the gift will display twice. An alternative is to record the stock gift as a Stock type when you sell the stock. You can enter a dollar amount for this type of gift. It does not display the amount on the Statement, but does reflect against a Pledge. It displays in the Gift-in-Kinds section, but without the dollar amount